BitFlow has been making Camera Link frame grabbers since 1999. With each successive generation of frame grabbers, BitFlow has improved the quality, flexibility, and robustness of their interfaces. Meanwhile, much has changed on the backend; PCI to PCIe, Gen 1 to Gen 2, etc. The Camera Link Specification has also been continuously evolving: 80-bit (10-tap) mode was added, Power over Camera Link (PoCL), new connectors, new tap formats. Even though the specification has been around a long time, it is still one of the simplest, efficient, and least expensive ways to get camera data into a computer. It also benefits from hundreds of thousands of pieces of CL equipment sold worldwide.

BitFlow has been on top of all these changes and has continuously improved and updated their Camera Link frame grabbers. The Axion-CL, the most powerful CL frame grabber BitFlow has ever manufactured, is the culmination of all of these improvements

The Axion-CL also benefits from other products in BitFlow’s line up. The Axion-CL uses the Cyton-CXP’s backend: the StreamSync DMA engine and buffer manager, as well as a brand new PCIe Gen 2 interface, with DMA optimized for modern (fully loaded, fully busy) computers.

The Axion supports up to two cameras. In dual camera mode, the board looks to Windows and application software like two completely independent frame grabbers. This simplifies the setup for multiple cameras as each camera is really treated separately. Of course, the cameras can be internally synchronized if needed, but they can also be run completely independently. The two cameras do not have to be the same resolution, frame rate, trigger mode, or even tap format.

The StreamSync system consists of an Acquisition Engine and a Buffer Manager. It was first released on the Cyton-CXP and is a departure from previous BitFlow frame grabbers. The StreamSync system is a start-from-scratch complete redesign of the acquisition and DMA parts of a frame grabber. BitFlow used its years of experience in this area to design a next generation, super efficient capture system.

The Axion-CL has a Gen 2.0 x4 PCI Express bus interface. The Gen 2.0 PCIe bus doubles the data rate of the Gen 1.0 bus while using the same footprint and connectors. The Axion-CL is fully backwards compatible with Gen 1.0 motherboards, though the data rate will be halved. However, Gen 2.0 motherboards have been shipping for a few years and will be the norm on almost all motherboards looking forward. The board will work in any slot that it fits in. This means not only x16 and x8 slots, but also, as is becoming the trend, x4 and x1 slots that use x16 connectors. The performance will be degraded in x1 and x4 slots, but the board will work fine in applications that don’t require maximum data rate.

Unlike previous BitFlow products, the Gen 2 products use an XML base camera configuration file. These files can be edited in any text editor. The file format is fully documented (see the downloads page). The XML file format is unique in that very few items are needed in order to get the board up and running with a given camera, which still supports a rich set of tokens for very customized support of the board and/or camera. The XML camera files also support multiple modes for a given camera. This simplifies file management as only one file is needed for a particular make/model of a camera. All of its modes are supported internally by the token in the XML file.

Supported by a GUI camera file editing utility (CamEd), the Axion-CL can acquire fixed or variable size images and features a programmable ROI (Region Of Interest) sub-windowing capability. The board provides a full set of camera control signals (CC1, CC2, CC3, CC4) and sync inputs (LVAL, FVAL, PCLK, trigger, and encoder) for each camera connected to the board (up to two cameras can be connected). These signals are completely independent, although there are provisions for driving all cameras from a signal set up encoder/trigger signals. There is also a large number of programmable general purpose outputs and inputs that are not tied to the camera’s timing. The Axion-CL board, as with our past interface products, supports not only simple triggering modes, but also complicated, application-specific triggering, and control interactions with your hardware environment.

I/O signals can be routed to/from many internal and external destinations, providing a flexible routing that is unprecedented in the industry. In addition, there are separate hardware I/O signals which can be connected to/from an external source. Finally, each CL camera has a full set of these signals which can be run independently. The Axion-CL board, as with our past interface products, supports not only simple triggering modes but also complicated, application-specific triggering and control interactions with your hardware environment.

Adding the Axion-CL to your application is simple with our SDK, which supports both 32-bit and 64-bit operating systems. Applications can be developed using C/C++/.NET and our sophisticated buffer management APIs. In addition, free drivers can be downloaded from our web site for most 3rd party machine vision packages. The Axion models are software compatible with each other, as well as with all the other current BitFlow frame grabbers. This makes migrating applications from Camera Link or analog to CXP and vice-versa simple and quick. 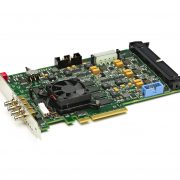 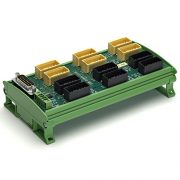 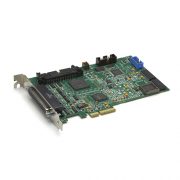 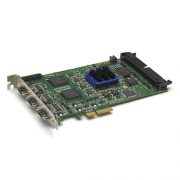 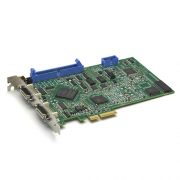 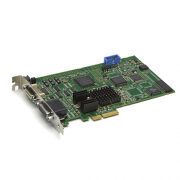